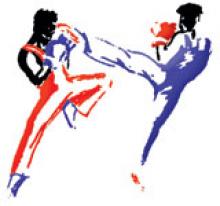 Savate, which literally means 'old shoe', is the only kickboxing style that uses shoes in the ring. The shoe becomes a weapon for the fighter to use against his opponent. This system of fighting was born in the streets of France and evolved to become a very sophisticated system of self-defense. It was the most popular fighting art in Europe up to the beginning of the century. Unfortunately World War I and II claimed the lives of many masters and students. But Savate rose from the ashes and flourished once again. It now takes its place as one of the most popular and complete fighting systems in the world. Its history, its masters and champions past and present give Savate its unique flavor not found anywhere else.